Hydrogen fuel cell technology has the potential to revolutionise the way we drive cars, launch rockets into space, transport products and power cities on a global scale. A hydrogen fuel cell uses hydrogen as fuel to power an electrochemical process that only produces water and heat as waste. The result is efficient, emission-free and high-quality energy.

NASA has used liquid hydrogen to fuel its rockets and space shuttles since the 1970s. Apart from powering the shuttle’s electrical systems, hydrogen fuel cells provide purified water for consumption by the crew. (1)

What is a Hydrogen Fuel Cell?

What are the advantages of Hydrogen Fuel Cells?

Below are some of the advantages the hydrogen fuel cell presents over other power sources:

Hydrogen fuel cells are an eco-friendly energy source, emitting only heat and water as waste, making the environmental impact neutral when the hydrogen is produced using renewable energy. It’s also worth noting that hydrogen fuel cells do not produce noise pollution like other renewable energy sources, such as wind power. As with electric cars, hydrogen-powered cars are much quieter than those that use conventional internal combustion engines.

Furthermore, unlike biofuels or hydropower, hydrogen generation does not require vast tracts of land. (2)

Hydrogen fuel cell power units have an incredibly rapid charging time. Whereas charging an electric vehicle can take 30 minutes to several hours, hydrogen fuel cells can be recharged in less than five minutes. Thanks to this short charging period, hydrogen-powered vehicles offer the same level of flexibility as conventional cars. (3)

Ideal for use in remote areas

Hydrogen generated and stored locally may prove a viable alternative to diesel-based electricity and heating in distant places. This would reduce the need for fuel transportation and improve the lives of those living in remote regions by offering a non-polluting fuel sourced from a readily-available natural resource.

This is how the SFC hydrogen fuel cell works 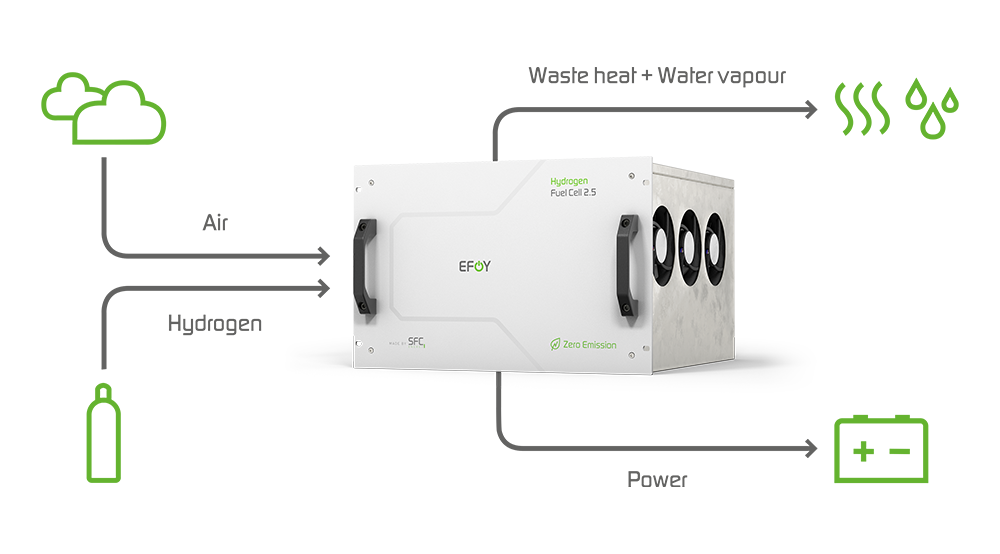 What are the future prospects for Hydrogen Fuel Cells?

Hydrogen fuel cells have the potential to play a significant role in the transition to a low-carbon future by:

The cost of hydrogen is already reducing globally, thanks partly to lower renewable energy costs and advances in water electrolysis and hydrogen fuel cell technologies. (5) With increased investment in hydrogen infrastructure and falling net costs, the hydrogen economy may be vital in the transition away from hydrocarbons.

SFC EFOY Hydrogen Fuel Cells are based on PEM (polymer electrolyte membrane) technology. The hydrogen power generators create energy using hydrogen as a fuel, replenished by oxygen from the atmosphere. This technology solely generates power and water, making it incredibly eco-friendly. Hydrogen can be created environmentally sustainable using renewable energies such as wind or solar, making it carbon-neutral.

Which areas of application are there for SFC Energy’s Hydrogen Fuel Cells?

SFC Energy supplies its sustainable hydrogen fuel cells in the oil and gas industry, security and industrial applications and the consumer market.

The EFOY Hydrogen Fuel Cell 2.5 offers the best combination of dependability, power and environmental friendliness when it comes to power generation. Mobility infrastructure, innovative traffic applications and the uninterrupted operation of vital infrastructure are all possible with the EFOY.

Plus, thanks to the EFOY Cloud service, you can monitor your fuel cells via laptop, tablet, or smartphone.

SFC hydrogen fuel cells are valuable in the defence and security sectors in various applications. Military SFC solutions are MIL-STD certified and toughened for military use in the field.

The EFOY fuel cell is a compact but powerful generator that enables you to be fully independent of the power grid. The fuel cell charges all common 12 or 24 V battery types fully automatically, reliably, quietly and environmentally friendly. With the EFOY fuel cell, you can take your eco-friendly generator wherever you go – in your motorhome, boat, or cabin. Conclusion On the way to an independent power supply, hydrogen as an energy carrier is not only particularly sustainable and environmentally friendly, but also equally flexible in remote regions of the earth. However, further research is needed into the production of hydrogen, which to date is still quite energy-intensive. The interest in renewable and environmentally friendly energies is enormous and the hydrogen fuel cell will play a major role in the future in industry as well as in the private sector.

At SFC Energy, we understand that no two industries are the same. Our multidisciplinary team of process automation, drives and motor control, and off-grid energy experts will collaborate with your firm to provide an industry-specific solution with quantifiable outcomes. Contact us.

EFOY Hydrogen Fuel Cells are based on PEM (polymer electrolyte membrane) technology. They generate power from the fuel hydrogen complemented by oxygen from the air. Hydrogen is directly converted into power. In addition to power, only water vapor is produced. This is exceptionally environmentally friendly.

The EFOY Hydrogen Fuel Cell 2.5 expands SFC Energy’s extensive product portfolio with energy solutions in the higher power range. With just one control unit, nominal outputs from 2.5 up to 50 kW can be individually scaled. Operation and installation are very simple and there are no emissions, so that the EFOY Hydrogen Fuel Cell can also be used in ecologically sensitive areas. The fuel cell is very quiet and efficient. 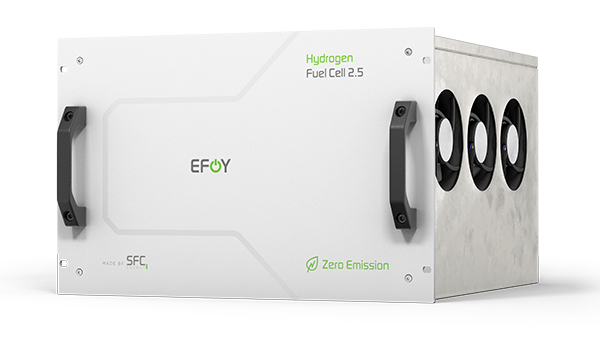 Fuel for the EFOY Hydrogen 2.5

Hydrogen is gaseous, colourless and odourless. It is typically stored in compressed gas cylinders from 200 to 300 bar. Based on its weight, hydrogen has a very high energy density, is safe for the environment and non-toxic to humans.

Through the electrolysis process, hydrogen can be produced in an environmentally friendly way from renewable energies such as wind or solar. The hydrogen produced in this way is carbon dioxide-neutral. The electrolytic production of hydrogen is the simplest and – in relation to the electrical energy used – a very efficient process. The water electrolysis and the fuel cell reaction are based on the same electrochemical principle: by reversing the current direction, electrical energy is consumed (electrolysis) or released (fuel cell). 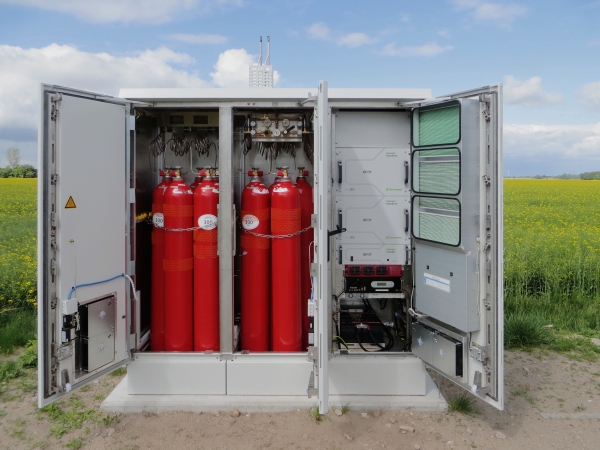 We are happy to help you personally!