This is how the SFC direct methanol fuel cell works 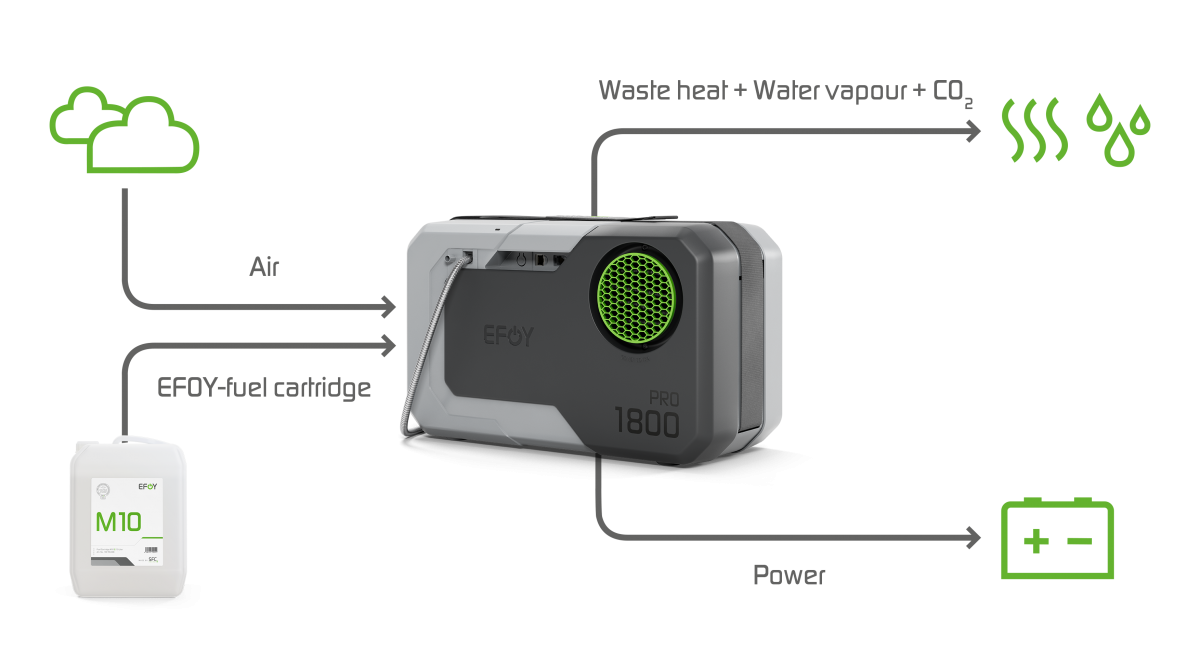 The EFOY Pro charges the batteries fully automatically. The integrated charge controller permanently monitors the charge status of the battery. When required, the EFOY Pro is started automatically and turned off again when the battery has been charged. This means not only will you always have full power reserves, but your batteries will also last much longer because continuous charging prevents deep discharge. 230 V devices can be operated when an inverter is used.

The EFOY fuel cells are based on DMFC (Direct Methanol Fuel Cell) technology. They generate power from the fuel in the fuel cartridge (methanol), complemented by oxygen from the air. Methanol is directly converted into power. In addition to power, all this creates is waste heat and water vapour with a little carbon dioxide. This is extraordinarily environmentally friendly.

The fuel offers significant advantages for mobile and portable applications because the liquid alcohol methanol can be transported anywhere safely, conveniently and effortlessly in the practical EFOY fuel cartridges. 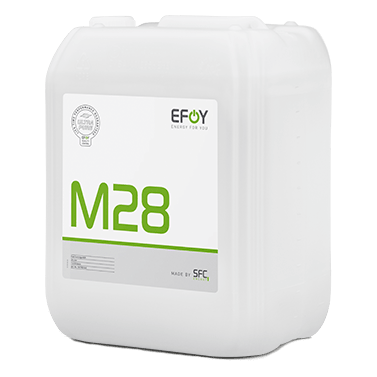 In accordance with the CLP regulation, methanol is classified as toxic and highly flammable substance. Please refer to the safety data sheets for further information.

As early as 1839, Sir William Grove set the course for an environmentally friendly energy supply. He was light years ahead of his time. Unfortunately, it took another 180 years for the breakthrough of this groundbreaking idea. His invention? A precursor to the direct methanol fuel cell (DMFC). Apparently, the world was not yet ready for a new form of energy source. No wonder, because the first direct methanol fuel cell didn’t stand a chance against the dynamo and the internal combustion engine. Today we know: Fuel Cell Technology is taking a key role on the way to a greener future. SFC Energy has been accompanying and shaping the development of fuel cell technology since its foundation in 2000. With EFOY and EFOY Pro fuel cells, SFC Energy is one of the essential innovation drivers in the industry. But how does the direct methanol fuel cell actually work? In principle, its design is similar to that of a battery. It has an anode and a cathode. They are separated by a membrane. By means of an electrochemical reaction, the direct methanol fuel cell converts the fuel, i.e. methanol, into electricity in combination with oxygen.

The only waste products of the combustion process are waste heat, water vapor and a small amount of carbon dioxide. This is where the decisive advantages of the direct methanol fuel cell already become apparent. Conventional generation of electric power from chemical energy sources is achieved by combustion and utilization of the resulting hot gases. A heat engine drives a generator and thus makes the electricity usable. The direct methanol fuel cell eliminates this intermediate step. It generates energy without any detours. This makes it interesting for a whole range of applications. For example, in stationary communications, for measuring stations and monitoring systems, or for new mobility concepts. In electric vehicles, for example. Here, for example, it functions as a range extender. Thanks to fuel cell technology, electric cars achieve greater ranges. And one thing is clear: In practice, the efficiencies achieved so far by fuel cells are significantly higher than those of gasoline or diesel engines. This makes the direct methanol fuel cell a far more powerful and at the same time more environmentally friendly alternative. It is environmentally friendly not only because of its vanishingly low carbon dioxide emissions.

Environmentally friendly on the road with the direct methanol fuel cell.

It is also particularly durable. Direct methanol fuel cells – like all fuel cells – operate without moving parts. As a result, they not only operate particularly quietly compared to combustion engines or gas turbines, but also require less maintenance. Due to the lack of moving parts, there is no mechanical friction and thus hardly any significant wear. This is a strong argument for users who are interested in the technology or want to buy a direct methanol fuel cell. Low maintenance requirements reduce application downtime and thus operating costs in the long term. Compared to conventional energy generators, it also saves money. At the same time, it is a true all-rounder, the Swiss army knife among sustainable energy generators, so to speak. Thanks to the clever hybrid principle, direct methanol fuel cells by SFC Energy can easily be combined with other power generators. For example, with a solar panel. Renewable energy sources are continuously gaining in importance. However, solar modules are dependent on continuous sunshine. During periods of darkness, power generation lies idle. The direct methanol fuel cell fills this gap. If the solar panel does not supply enough power due to bad weather, the direct methanol fuel cell switches on and bridges the supply.

Just as easy as the hybridization of the direct methanol fuel cell works, so does the exchange of the operating material. Methanol is a liquid alcohol. It is available in fuel cartridges of various filling sizes – so users always get the right amount for them. The cartridges can be safely and easily taken anywhere. Replacing empty containers is just as smooth and effortless. Specialized personnel are not required for this. Users can carry out the exchange themselves. With Hydrogen fuel cells this is different. In this case, only an expert may replace empty fuel tanks. The type of fuel is already the difference between direct methanol fuel cells and hydrogen fuel cells. With the EFOY Hydrogen fuel cell, SFC Energy offers all professional users a suitable solution for high performance requirements. EFOY Hydrogen 2.5 fuel cells cover power ranges up to 20 kW and function, among other things, as emergency power generators in communication facilities or critical infrastructures. While the EFOY Hydrogen uses hydrogen as a fuel, EFOY Pro and EFOY direct methanol fuel cells work with methanol.

Pioneer with many years of experience: Your SFC Energy.

Both fuels must first be produced for the respective systems. Currently, the production processes of methanol and hydrogen are still very energy-intensive and thus comparatively cost-intensive. But thanks to the rolled-out National Hydrogen Strategy of the German government, this is set to change. With subsidies for market expansion as well as for research & development and cooperations, hydrogen and fuel cell technology is to be spread as widely as possible. SFC Energy has been working on this since 2000 and is one of the pioneers with in-depth know-how and an extensive network. Its direct methanol fuel cells, such as the EFOY, EFOY Pro, EMILY and JENNY, as well as the hydrogen fuel cell EFOY Hydrogen, enjoy a high degree of international recognition and trust. Thus, SFC Energy is a trusted partner for private and also professional users. Together with them, it is shaping a greener future – today.

EFOY fuel cells have been developed for the leisure sector and ensure a fully automatic recharge of the battery, e.g. in a motorhome, on a boat or in a cabin. As EFOY Hybrid Power, fuel cell and lithium battery are a perfectly matched energy package.

For industrial applications, EFOY Pro fuel cells are the ideal power generators. The EFOY Pro is used for on-board power supply in vehicles, as off-grid power supply, e.g. for monitoring systems, measuring stations, oil and gas and many other applications.

For the special requirements of military users and security applications, SFC Energy offers a special fuel cell portfolio as well as a coordinated power management system.