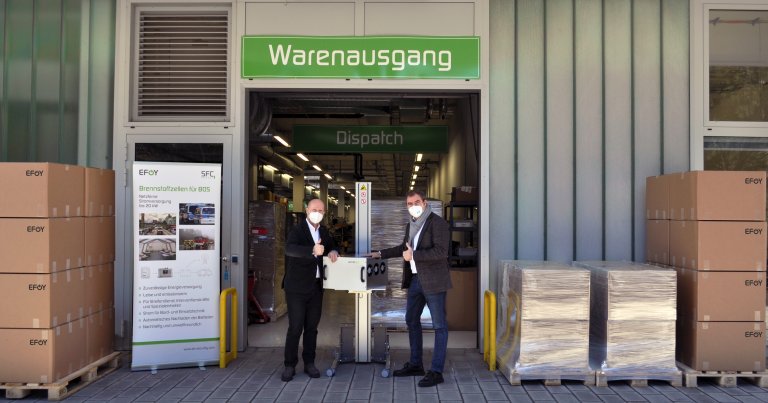 Mr Hahn will get a deeper understanding of the technology and production in the context of a partial delivery of 40 EFOY Jupiter hydrogen fuel cells for network hardening of the public authority radio in Bavaria. Assisted by funds from the National Hydrogen and Fuel Cell Technology Innovation Program (NIP II) of the German Federal Ministry of Transport and Digital Infrastructure (BMVI), four other German states besides Bavaria will be equipped with state-of-the-art hydrogen fuel cells for emergency power supply of the public authority radio. At the same time, the visit of the member of German Parliament serves to prepare a round table on hydrogen strategy in the German federal State of Bavaria.

The EFOY Jupiter hydrogen fuel cells are used in system cabinets for emergency power backup of radio towers of the public authority radio network BOSNet. In the event of a blackout, the hydrogen fuel cell ensures uninterrupted power supply to the respective mast. Low downtimes are absolutely essential, especially for critical infrastructures such as public authority radio. Compared to previously used diesel generators, hydrogen fuel cells by SFC Energy not only offer much shorter response times, but also do not produce any environmentally harmful emissions or particulate during operation, operate more quietly, and generate low operating and maintenance costs.

"As fuel cell pioneers, we started focusing on hydrogen technologies early on and together with our partner adKor are benefiting from the German Government’s National Hydrogen Strategy. Supported by targeted funding, we have succeeded in creating additional qualified jobs in R&D and production at SFC Energy in Brunnthal and in significantly expanding our competencies. These kinds of projects pave the way for a modern hydrogen economy in Bavaria and Germany. This is also how we build competence and competitive advantages for the global market,” says Dr. Peter Podesser, CEO of SFC Energy AG.

"To see the successful implementation of the national hydrogen strategy in a concrete application really makes me very proud and happy. It confirms my belief that Germany and the district of Munich, as HyLand-Hydrogen regions, are on the right path to sustainable energy transition with a focus on decarbonization. Targeted support programs, such as in this case the emergency power supply for official digital radio by the Federal Ministry of Transport, create new jobs in future-oriented industries and ensure our international competitiveness. At the same time, they protect the nature and environment of our homeland,” says Florian Hahn, Member of the German Parliament.